“Chopin, who died in Paris in 1849 at the age of 39, dreaded being buried alive, and asked that his body be cut open before burial and his heart sent to Warsaw. Accordingly, his heart was cut out, sealed in a crystal jar and smuggled past the Russian authorities into what is now Poland... During the Warsaw Uprising in 1944, the occupying German forces, anxious about Chopin's status as Polish national icon, suppressed performances of his music. His heart was removed from the church [the Bazylika Świętego Krzyża in Warsaw] and kept at the headquarters of the SS commander Erich von dem Bach-Zelewski. After the war, it was returned to the church and interred in a pillar inscribed with a verse from Matthew: For where your treasure is, there your heart will be also.” 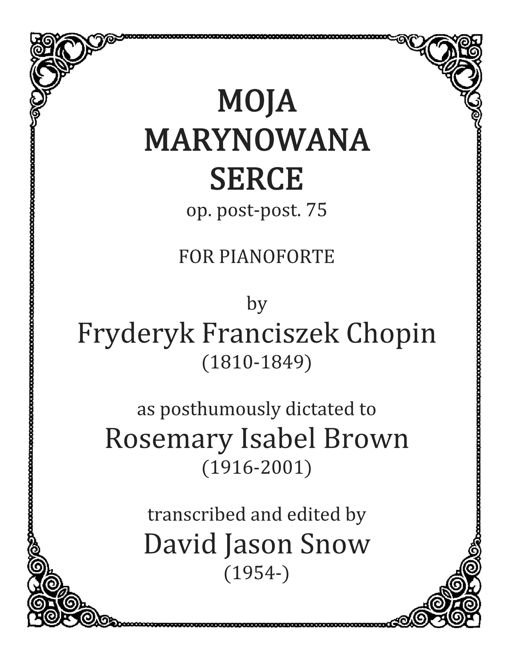 On November 7, 2017, spirit medium Rosemary Isabel Brown (1916-2001), to whom Beethoven, Brahms, Chopin, Debussy, Grieg, Liszt, and Mozart dictated posthumous compositions during the mid-20th century, emailed from the hereafter to alert me to the fact that Frédéric Chopin was “deeply offended” (wkurwiony is the Polish word he used) at the glib tone of recent reportage about his physical and mental health. He was particularly incensed at the New York Times article's headline, “Chopin's Heart, Pickled in a Jar, Offers Clues to His Death,” given that Chopin detested the classic Polish dish Marynowane serce cielęcia z kiełbasą i kapustą, which he was forced to eat as a child. In a fit of pique, he improvised the composition presented here, which Ms. Brown dutifully transcribed on her Commodore 64 computer. Being dead, however, she could not locate a new ribbon for her dot matrix printer, and thus she reached out to me to assist her in transmitting this important musical statement to the realm of the living. The solution we ultimately hit upon was for her to export notation data from her computer as a MIDI file, and send it to me in an email attachment, which I then saved and converted to audio.

About Moja Marynowana Serce:
In a striking stylistic departure, Chopin abandons the lithe melodiousness that characterizes his pre-mortem work, and gives vent to a primal, even brutish, mode of expression, an astonishing transformation in a composer who has been dead for 168 years. Although the work's rhythmic energy is akin in spirit (pardon the pun) to that of his Tarantelle in A-flat major, op. 43, the harmonic language is radically more complex. The late Ms. Brown put forth an uncharitable assessment of the composer's newfound harmonic vocabulary, suggesting that, in her words, “Fred is really starting to lose it after so many years as a stiff.” Nevertheless, it is heartening to observe that at this stage of his career, Chopin continues to grow as an artist, long after his bloated, pericarditis-ravaged heart was torn from his lifeless chest and consigned to bob in a fetid pool of preservative for centuries to come, and his tuberculosis-blighted corpse rotted into oozing filth. Ars longa, mors in sempiternum.