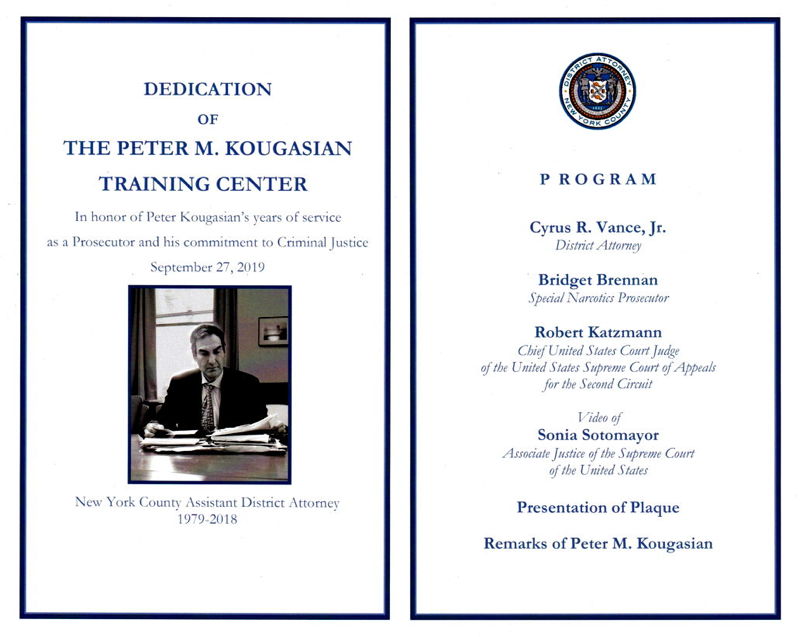 On Friday, September 27, 2019, Karen and I attended a celebration at the Henry J.Carter Specialty Hospital in New York where, via streaming video, we watched the dedication of the Peter M. Kougasian Training Center at the Manhattan District Attorney's Office. Peter retired from the DA's office in 2018 after 40 years of service due to the effects of amyotrophic lateral sclerosis (ALS), but his intellect, humor, and soulfulness remain indomitable. Here are a few highlights of the event:

There's an insightful biographical profile of Peter on the New York City Bar website, but you won't get a complete picture of the man until you see him in action onstage:

From time to time, Peter and I have engaged in artistic collaboration, he as wordsmith, I as composer. Our first project was a setting of his paean to diseased relationships, I'm getting sick over you:

There's no room in my schema
for yaws or emphysema.
Epidemics leave me blue.
I don't dig Asian flu.


But when winter passions rock us
with winds of streptococcus,
well then, what else can I do?
I get sick over you.


Oh, every time you sneeze
you just Hippocra-tease me
with the dreams of your disease
and the cute way that you wheeze.


There's no sense in our waiting,
my heart is fibrillating.
It's a love bug no sulpha drug can cure.
Yes, it's true:
I'm getting sick over you.


So let's walk down the aisle.
I'll share your tears, your smile,
and I'll know by your "I do"
that I'm making you sick too...


I think that Peter was hoping for a musical setting in the urbane style of the American Songbook, but surprise, I'm no Cole Porter (although I sing about as competently as Porter did).

Our next stab at immortality was inspired by a songwriting contest sponsored by the manufacturers of Duck brand duct tape. Yes, you read that correctly. The subject of the song was supposed to be the virtues of duct tape, but not wanting to agonize over lyrics for such an inane (albeit irresistibly inane) endeavor, I recruited Peter to supply the poetry, knowing that he would cook up something delicious in a jiffy. I was not disappointed. What better way to tout the strength and reliability of Duck brand duct tape than to dramatize its application in a real-life situation we can all relate to? The song, titled Stuck together, did not win the song contest. Philistines.


Confession: I supplied the lyrics to the chorus, and I take full responsibility for the grammatical abuse. Peter would never have allowed himself to write “Stuck together, you and me” for the sake of a cheap rhyme. So not only am I no Cole Porter, I’m no Stephen Sondheim, either.

Our one and only collaborative effort that succeeded in being published was not a song, but what can be best described as Audio Art. It was developed in response to a call for texts and recordings exploring the subject of hysteria. The publication sponsoring the call, the now-defunct Link: a criticial journal on the arts, solicited works that “explore the complex meanings of hysteria throughout history and in contemporary society, the wildly different guises in which hysteria appears, and the impact of hysterical conditions on artistic practice.” Again, it was the potential for transcendent silliness that compelled me to beg for Peter's involvement. The dual meaning of hysteria as hilarity and as psychosis immediately suggested the scenario of Sigmund Freud doing stand-up comedy, and who better to write that script than comedian-philosopher Peter Mark Kougasian. Not only did Peter compose the text, he recorded a recitation of it on audio cassette as a guide to performance, assuming that I would record the speech myself in higher fidelity for the final mix. Peter's performance was so masterful, however, that I used it instead, exaggerating the recording's crappy sound quality in imitation of a very old archival recording. We prefaced the track with the following comments:

“It is a little-known fact that Sigmund Freud began his career in show business playing small clubs and Würsthauser along the Tyrolean Schnitzel Belt circuit. He would typically bring his most seriously disturbed patients on tour with him, putting their neuroses on display while lecturing the audience in his trademark totepfanne (deadpan) style. Although decried as exploitive and barbaric, he defended this practice as an exercise in radical therapy. It was during these gruelling tours that Freud honed his deadly adroitness with hecklers, often reducing them to a condition of crippling emotional dependency with a single whithering exchange (a great boon to his private practice).”

The track was featured on a compact disc included in the November 1, 2000 issue of Link. Art critic Douglas Kahn had this to say about our effort:

“Many of the pieces attend faithfully to the issue's special theme of hysteria and none are more hysterical than David Snow and Peter Kougasian's Freud in Konzert, an archival recording of Freud (speaking in English no less) when he was a stand-up comic playing the small clubs and Wursthüuser along the Tyrolean Schnitzel Belt, as the artists explain in their notes. The recording reveals that he is facing a tough house, their difficulty with his jokes arising no doubt from not having read his book on the topic, an unfazed Sigmund gesticulating his cigar like Groucho.”